the promotional video shows the app and product ecosystem

Blueair is the world leader in helping people breathe healthier, cleaner indoor air at home and work, and have been pioneering and championing indoor air purification as a means to improve human health and wellbeing for over twenty years. The Blueair IoT application allows people to connect up to 5 different devices; including an array of air purifiers and an air monitoring device called the Blueair Aware. When I joined as design lead, the design was only a look-and-feel board created by an agency. Many of the hardware products were still in production, and there was a lot of ambiguity around how the entire ecosystem would tie together. I moved fast, creating a design vision for the product inspired by the industrial design to create a cohesive look and feel and experience on par with what clients expect in terms of physical product usage and mental models. The first working prototype was out in 3 months, and this allowed us to put the experience in front of actual clients early, gauge feedback, and then iterate upon it. Later during the year in which the project started, Blueair celebrated winning two Envisioneering Innovation and Design Awards for its breakthrough environmental air purification products. The new Wi-Fi-enabled Blueair Sense and Aware Air Quality Monitoring ecosystem were honoured during Showstoppers at Europe’s Biggest Tech Show, IFA Berlin 2015.   70+ companies competed to win recognition for their innovation, design and value to consumers and attract key startups, disruptors and innovators. The app also ranked as one of the top nine best tech gizmos at the IFA show. The Blueair work that I contributed to was an immense success, with the company eventually selling to Unilever for billions of Swedish Krone, soon after the completion of the work. This was a considerable achievement and testament to the quality of the job done. The Blueair app and complementary devices were the world’s first fully working intelligent indoor air monitoring, control and purification system. The Blueair App was shortlisted for the clean technologies award in the same year of its release. The Apple watch was also released in 2015, and I worked on a version of the app for the watch and Android wearables.  I also worked with an external team to refine the usability of the Blueair in-car air purifiers and the hands-free interaction necessary for this. 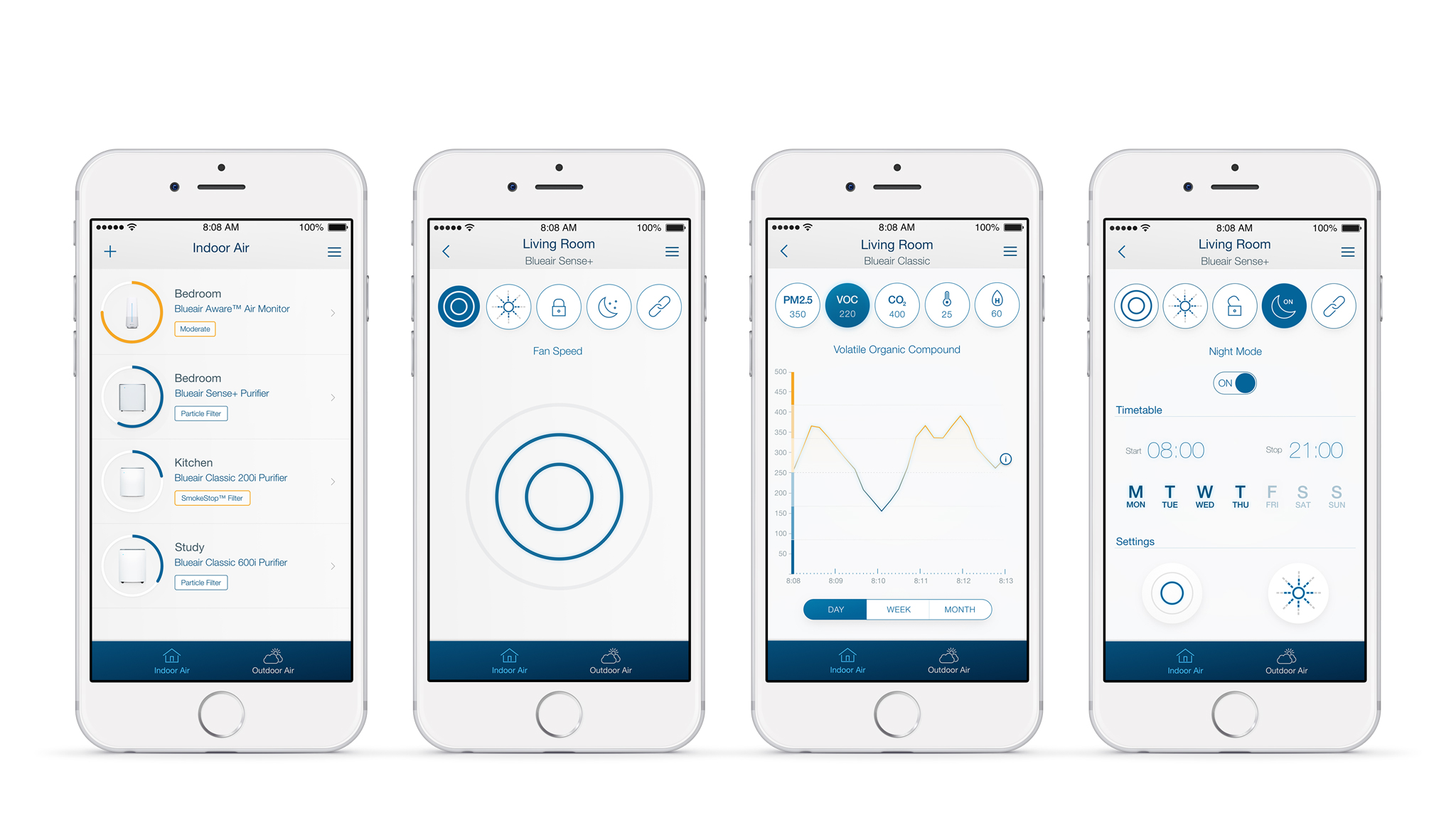 My first steps were to take to research and explore air quality competitors and applications and devices that offered similar interaction patterns. I spoke to floor staff at Blueair showrooms and interviewed stakeholders, air quality scientists, industrial designers and commercial teams. I then moved ahead exploring various ideas, doing some initial wireframes, and working closely with the product manager to define an MVP.  A key goal was to be first to market to establish Blueair as a leader in this domain, and this set the stage for rapid iteration, prototyping and testing. Since this was a world first, there were many challenges with the implementation, and design compromises had to be made when this happened. We worked through this proactively and positively and kept our focus locked to the end goals of giving the customers control of their indoor air quality. I figured out the connectively and flow challenges in cases such as failed connection attempts etc. when the devices were but a few working circuit boards and LEDs on my desk. 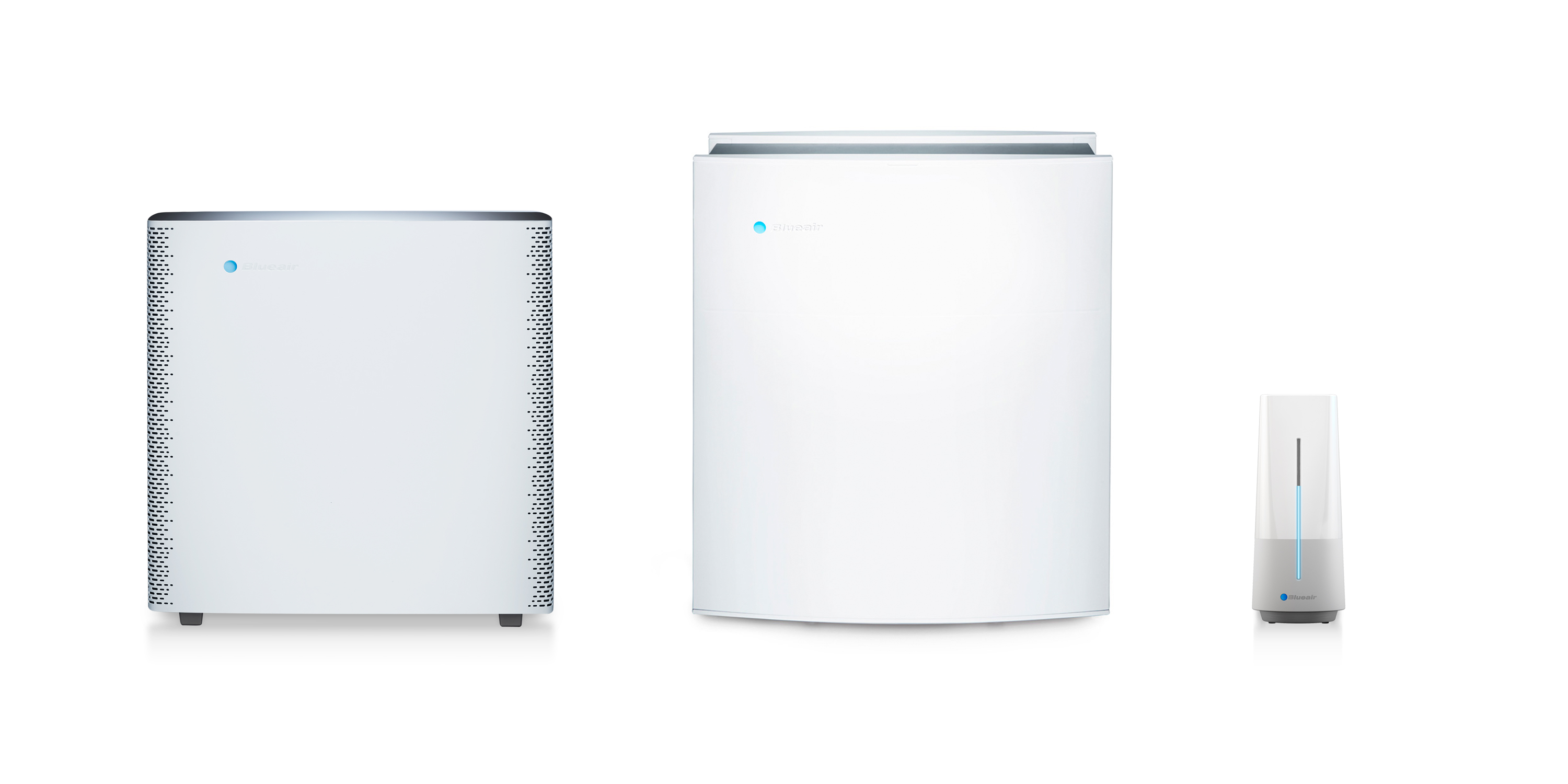 When I started on the Blueair project, I took over from a design agency that had put together an initial look-and-feel board. I worked directly with the product manager and offshore engineers, as well as various seniors at Blueair. I guided the implementation of the design, worked closely with the offshore teams and assured that product interactions were implemented as intended. I was quick to spot opportunities and raised the quality bar on every occasion. I also interacted with air quality scientists to define thresholds and translate the science into simplified customer air quality data. I partnered with the Blueair teams’ industrial designers and worked with them to formulate buttons and icons for the physical products, translating clearly in all geographies. 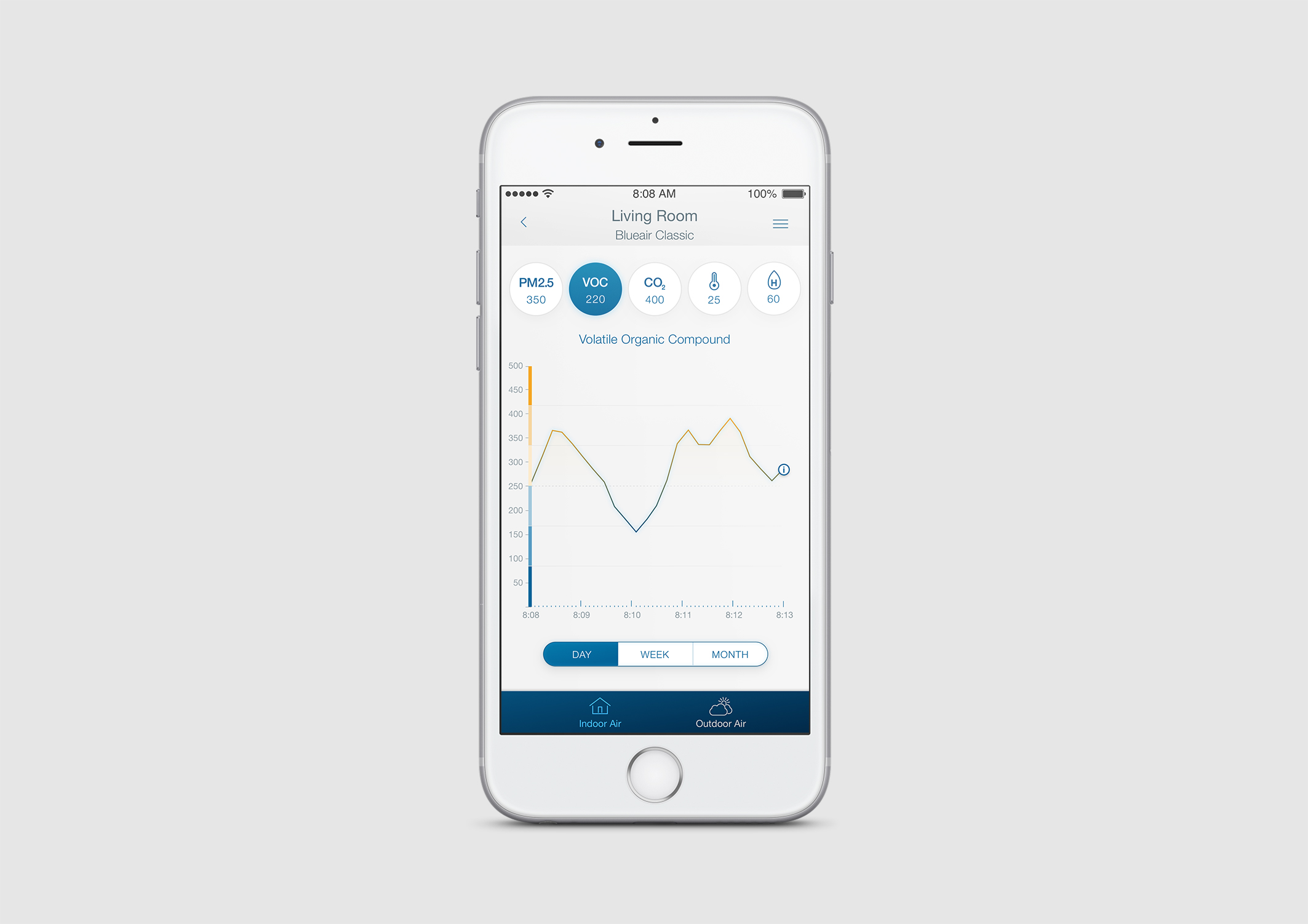 My role was to set the design vision for the application and help to solidify interactions across the connected product ecosystem. I also shaped and defined the visual language to be on-brand alongside a streamlined experience. The way I approach design is to be inclusive and stimulate collaboration. I know the power of focussed and empowered teams to inspire the most innovative solutions. I built low and high fidelity interactive prototypes using Sketch and Invision and tested, and screen recorded these interactions to clarify the intended experience. I disseminated these recordings and presented the results to stakeholders. I gathered feedback and reported change to explain where and why this change was happening to the broader team.  I created flow diagrams and information architecture outlines, and a myriad of wireframes throughout the process. I kept stakeholders closely informed. We conducted remote user testing across the globe and then refined the product offering around this feedback. To ensure quality, I did not merely hand over my design work to the engineers but closely guided the implementation, paying close attention to where challenges were arising and doing my best to support them in finding a resourceful compromise that would not hinder the experience.

behind the scenes GALLERY